From all of us here at Hogan, we thank you for all that you do. We’re so proud to have you on our team. Without you, we’d be lost. But don’t take our word for it, see what others are saying too.

You’re someone we all look up to.

Vontrellius Oneal has been with Hogan on the Dollar General account out of Jackson, GA since it opened in February of 2018. Vontrellius has proven to be a leader amongst his fellow drivers, and many new drivers would seek him out for advice on how to be successful at this account. In 2019 we made Vontrellius a trainer where he excelled once again. Vontrellius is always willing to spend the extra time with a trainee to ensure that they are not only trained to drive and unload trailer products, but that they learn to do it safely. Vontrellius takes pride in his job, and that is what makes him one of our highly respected and valued employees.

Althea Thompson is
Hogan’s Driver of the Year

Kansas City, MO (October 21, 2020) After a record-breaking Fiscal Year, P&G is recognizing a few of our driver partners on the front lines delivering business, daily. Five nominated drivers now hold the title of Procter & Gamble “Driver of the Year.”

One of the five is Hogan Transport’s own Althea Thompson. Thompson began driving over the road with Hogan in 2011 and then made the switch to P&G in March 2012. When asked about her nearly ten-year relationship with Hogan, she said: “I stay with Hogan because when it comes down to family they understand you one hundred percent. When you need time off they give it to you. They take family time seriously.”

Each candidate received the nomination from a colleague who answered a series of selection criteria to make a case for their chosen employee. Thompson was nominated by her former dispatcher because he can trust that she gets the load there on time. “He told me I was involved and said he was going to put me down since I run P&G. I’m always involved with P&G. That’s all I know,” she said.

The qualifications ranged from number of shipments supporting P&G’s business to community service activities. Finalists were selected by leaders within Procter & Gamble North America Transportation Operations and Purchases organizations. Every individual nominated received at least a “Driver of the Year Nominee” certificate from P&G recognizing their hard work and contribution to the business.

Top Finalists were showcased formally during the Virtual Carrier Summit, “Charging Toward the Future Together,” held on October 14, 2020. As part of the Summit, P&G recognized a few, special carriers for excellent performance and partnership.

When asked about her victory, Thompson exclaimed, “I’m on cloud nine because I’ve never won anything before. I’m so excited. I’m enjoying it.”

The nearly tenured driver is known for being an integral part of developing Hogan’s relationship with P&G in the Kansas City area. With eight plus years of safe driving, 99.9% on time, 0 DOT recordable accidents, and 160 shipment YTD on P&G; Thompson was the obvious choice.

According to Thompson, she has consistently remained a faithful supporter of every P&G initiative. “I’ve went green with them. When they went green, I did the gas trucks. When they made a change, I did a change with them. I’ve always complied with changes,” she said.

With the upcoming summit on the horizon, Thompson is eager to attend. She has already received a gift card from Hogan and is looking forward to “the prize at the end of the rainbow.” When asked what’s next for the recent winner she said, “I’m with P&G for the ride. I’m cool. I’m the laid-back type of person. I’m here for the wave.”

What can we say Will?

“I would like to give a shout out to William Brake.

Ever since he has come onto the account, he has been to numerous places that are very challenging. Between delivering to places that normal drivers don’t go — along with shippers and receivers that are out of the norm — he and many other drivers on the account are put in situations that are very questionable.

Without proper trip planning and calling in for guidance they would very easily be put at a safety risk. William contacted me in advance to verify where this was going and we went over the route and game plan. I wish every driver would be so thorough in their trip planning. If he was to follow GPS and not reach out to us, this could have easily been an accident waiting to happen. This account is not like the rest of the fleet on picking up and delivering to warehouses.”

The American Trucking Association (ATA) hosted the 2019 TMCSuperTech competition in Raleigh, NC in which our very own Rick Davis competed. Rick is part of our St. Louis Technician Team.

The Technology & Maintenance Council’s National Technician Skills Competition TMCSuperTech is an annual event held in conjunction with TMC’s Fall Meeting. TMCSuperTech is North America’s premier skills competition for professional commercial vehicle technicians. TMCSuperTech contestants come from all segments of the trucking industry, and many are state, regional, or corporate champions.

Rick won 1st Place in the 2019 NationLease Tech Challenge and placed 3rd overall in the TMCSuperTech heavy duty track competition. He placed 1st in the Wheel End station, Starting & Charging and Steering & Suspension. Congratulations Rick! We appreciate your dedication and commitment to Hogan and our equipment! Thank you for representing Hogan in this awesome event! #TeamHogan

Congratulations to Rick Davis out of the St. Louis facility for achieving 3rd place during the TMC Technical Challenge!

Over the weekend of May 31st – June 1st, the Missouri Trucking Association held its 52nd Annual Missouri Truck Driving Championship at the Branson Convention Center.

The two-day event, sponsored by the Association’s Council of Safety Supervisors, allowed on-lookers the opportunity to witness some of the state’s top drivers compete in several categories for the ultimate title of “Grand Champion”. That honor went to Hogan Transport’s Chris Morrison, who won the Sleeper Berth competition to clinch the Grand Champion win. Mr. Morrison’s accomplishment makes it the third year in a row that a Hogan driver has won the title. Another Hogan driver, Bruce Brewen, who was the Grand Champion in 2018 and 2017, won the 4-Axle.

Chris, who has been driving with Hogan for almost four years, said: “I’ve done everything. Worked for several companies and Hogan’s treated me the best.” In the past, Chris worked for companies that emphasized the freight over his safety—at Hogan it’s the other way around. “Safety comes first. They stress that a lot,” Chris commented.

In order to be eligible to compete, drivers must have no reported incidents for the entire year. Safety is one thing both Mr. Morrison and the Hogan team take very seriously. The competition ranks drivers on key measures such as safety and security, first aid and fire safety, pre-trip vehicle inspections, and driving skills. Competitors are given a written test, a hands-on safety inspection exam, and are put through a rigorous driving skills course that tests their ability to judge safe distances, maneuver tight spaces, park, and accurately position their vehicle over scales, before barriers and around curves. Mr. Morrison scored the highest point differential in all three areas for his skills and knowledge.

When asked about how his victory feels, Chris exclaimed, “I feel like a super star. I was nervous because I was hoping for 3rd or 2nd, but then I got first in Sleeper Berth. It’s the hardest one in the competition.”

At the banquet, where a record-breaking 729 people attended on Saturday evening, Chris described sitting in disbelief as his wife elbowed him when he didn’t realize his name was called. Chris won two trophies and the respect of the entire Hogan team. Pictures from the event depicting him with his trophies and family, were displayed on the office’s jumbo TV screen and he was featured on Hogan’s driver app.

Morrison will be joined by eight other class winners as the Missouri Championship Team travels to Pittsburgh, PA to compete against other state teams in the American Trucking Association’s National Truck Driving Championships, which takes place August 14th – August 17th. During the competition, the Missouri Team will compete against 450 other professionals vying for selection as the nation’s top professional truck drivers.

Thank you Joe. Seriously. Thank you.

One of our customers just wrote us this note:

“Joe really stepped up yesterday & helped in an impossible situation over at Home Comfort. I honestly do not know what we would have done without his assistance!!!!! I just wanted you to know that he was AWESOME!!

Hogan Transport’s Bruce Brewen, won the top trucking title. He earned the honor in 2017 and was a winner in his class the past three years. He is just the second grand champion in the last 30 years to win back to back titles in Missouri. Brewen also won four axle van class this year.

“We congratulate Bruce on being named Missouri’s grand champion for the second consecutive year,” said company President David Hogan. “It is a testament to Bruce’s thirty years of exemplary driving and professionalism with our company. We wish Bruce the best as he prepares to compete on the national stage in August.”

To show their appreciation, the Hogans gave Brewen a gift card to Gaston’s Resort on the White River. They also assigned him a new tractor.
Brewen, who has been driving with Hogan for nearly 30 years, said of the competition, “I’ll keep doing this as long as they’ll let me.”

The competition ranks drivers on safety and security, first aid and fire safety, pre-trip vehicle inspections and driving skills. Competitors are given a written test, a hands-on safety inspection exam and are put through a driving skills course. Brewen scored the highest point differential in all three areas for his skills and knowledge. 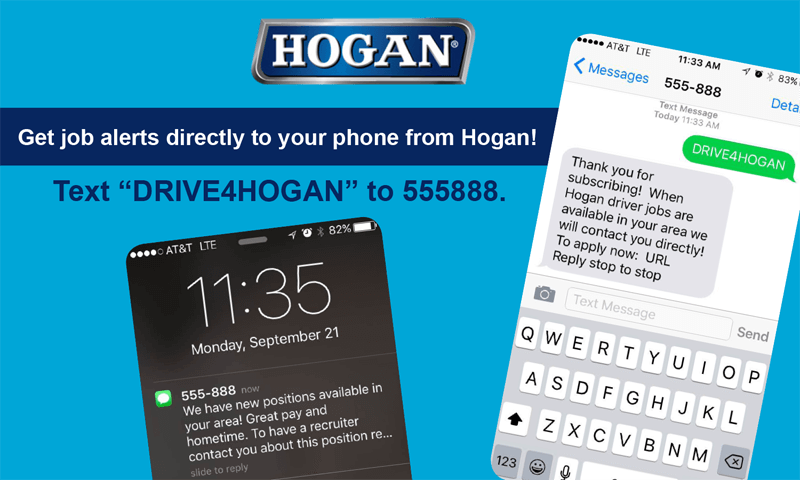